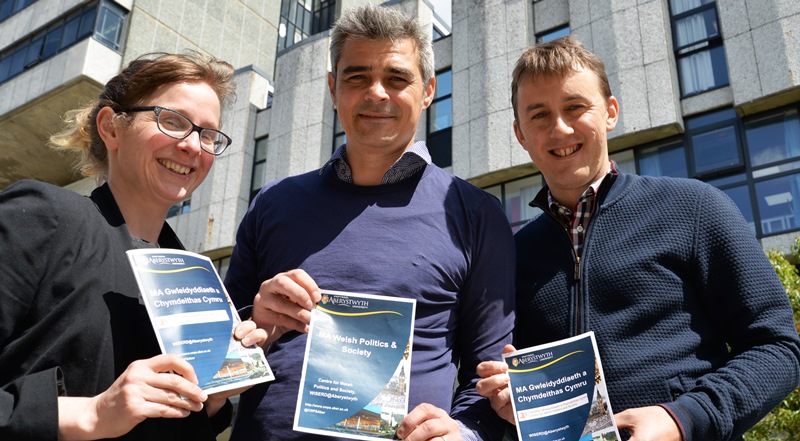 With Brexit dominating the early stages of the Westminster general election campaign, Aberystwyth University has launched a new MA that considers contemporary Welsh politics and society and the challenges faced after Britain leaves the European Union.
The new MA in Welsh Politics and Society was launched today (Friday May 5, 2017) by the Centre for Welsh Politics and Society and will welcome its first students in September 2017.
The aim of the new MA degree is to promote a sound understanding of the context of historical, cultural, political and socioeconomic contemporary Wales.
There is also a strong emphasis on employability with an opportunity to gain valuable work experience in the modules offered.
Dr Elin Royles, senior lecturer in the Department of International Politics and co-founder of the Center for Welsh Politics at Aberystwyth University, is the course co-ordinator.
“This course aims to nurture graduates who understand modern Wales from a multidisciplinary perspective that is so important as devolution of power to Wales deepens further and as we face the significant changes brought about by Brexit.
“A special feature of the course is that modules are drawn from three high profile departments across the University: the Department of Geography and Earth Sciences, the Department of History and Welsh History and the Department of International Politics.
“The course can give an excellent basis for those interested in pursuing careers related to politics and policy within Wales and beyond, whilst also providing a starting point for a PhD.”
Professor Mike Woods, Co-Director of the Centre for Welsh Politics and Society: “This programme forms a pivotal part of the Centre’s work and we are delighted that it will enable postgraduate students to study at an internationally leading research centre on political, social and economic issues of relevance to Wales.”
The Centre for Welsh Politics and Society was formally launched in January 2017 and builds on the influential and highly respected Institute of Welsh Politics at the Department of International Politics.
The Centre brings together geographers, political scientists, psychologists and historians from the Institute of Geography, History, Politics and Psychology as well as social scientists from related departments with an interest in Wales.
The Centre also plays a key role as the Aberystwyth branch of the Wales Institute of Social and Economic Research, Data and Methods (WISERD).